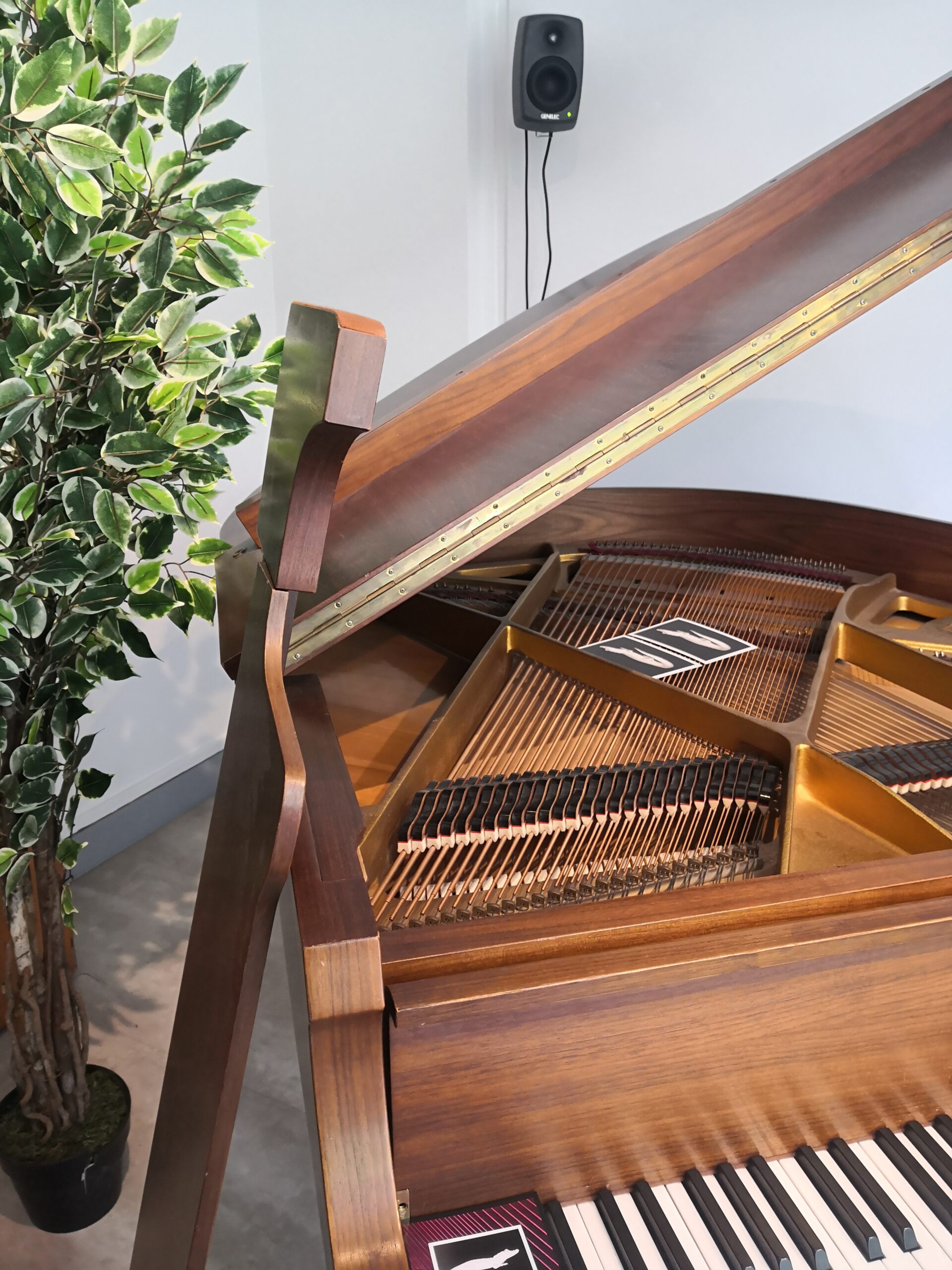 In a letter of 6 October 1858 to his lover Mathilde Wesendonck, Richard Wagner expresses his enthusiasm for the Érard pianos: “But this wonderfully soft, melan- cholically sweet instrument completely cajoled me back to music. I called it the swan that had now come to lead poor Lohengrin home again!”

The central starting point of my artistic research is a Erard’s grand piano, which I was working with during my research at Cité internationale des arts Paris. I composed a sound piece with recordings of each note as fixed media in Max MSP and generated randomized rhyhtm patterns. I thus added sine waves of different length and frequencies to create site specific rhythm patterns through overlapping sine wave curves in the stereo field.

Camille Érard, Pierre Érard’s widow, gave Wagner a grand piano after his stay in Paris. He composed the first act and the libretto in Zurich. He decided to compose the second act in the “solitude of Venice and had his Érard grand piano transported over the Alps”. He wrote the third act in Switzerland, in the noble Lucerne hotel “Schweizerhof”. Wagner travelled with the grand piano not only to Venice but also to Biebrich, Vienna, Munich, Tribschen and Bayreuth.

Erard grand pianos were very popular and were thus moved around a lot in the style of European expansion. The European idea of colonising the world and making it serviceable left its mark in salty, rusty Érard pianos that were left behind. As early as the 18th century, the French manufacturer’s most popular pianos were export-
ed not only to Europe and America, but also to French colonies in Asia or South America.

The pianos transported not only their flattering sound to all parts of the world, but also the standard concert pitch negotiated in many European tuning conferences, which was finally fixed at A1 = 440 Hz at 20° Celsius. In 1920, the Treaty of Ver- sailles states: Article 282, paragraph 22. Convention of 16 and 19 November 1885, concerning the manufacture of a standard tuning fork; this was followed by the ISO standard and in 1957 by DIN 1317-1 (German Institute for Standardisation).

The artistic debate is accompanied by the presentation of two albino alligators, which are currently at home in the Palais de la Porte Dorée in Paris in the Aquari- um Tropical, in the basement of the building. The Art Deco building was opened in 1931 for the “Exposition coloniale internationale”. The sculptor Elizabeth Prophet called it “the most spectacular colonial display the West has ever seen”. Equally impressive is the presentation of these white beings, who come from the US state of Louisiana at the foot of the Mississippi, a former very early colony of France (17th century). They were taken out of their habitat to be observed separately as superla- tives of the Fremdenschau in an artificial environment.

In her work, Maria Wildeis deals with electronic music compositions and live performances. With the help of the medium of the soundscape, the linearity of the perception of time in humans and non-humans, as well as the spatial aspects of sound. Inspired by historical connotations of various objects and events, as well as the different sound events in nature and sensory abilities of some animals, the com- poser experiments with temporal and spatial factors through two- or multi-channel performances and installations.

We use cookies on our website to give you the most relevant experience by remembering your preferences and repeat visits. By clicking “Accept”, you consent to the use of ALL the cookies.
Cookie settingsACCEPT
Manage consent

This website uses cookies to improve your experience while you navigate through the website. Out of these, the cookies that are categorized as necessary are stored on your browser as they are essential for the working of basic functionalities of the website. We also use third-party cookies that help us analyze and understand how you use this website. These cookies will be stored in your browser only with your consent. You also have the option to opt-out of these cookies. But opting out of some of these cookies may affect your browsing experience.
Necessary immer aktiv
Necessary cookies are absolutely essential for the website to function properly. These cookies ensure basic functionalities and security features of the website, anonymously.
Functional
Functional cookies help to perform certain functionalities like sharing the content of the website on social media platforms, collect feedbacks, and other third-party features.
Performance
Performance cookies are used to understand and analyze the key performance indexes of the website which helps in delivering a better user experience for the visitors.
Analytics
Analytical cookies are used to understand how visitors interact with the website. These cookies help provide information on metrics the number of visitors, bounce rate, traffic source, etc.
Advertisement
Advertisement cookies are used to provide visitors with relevant ads and marketing campaigns. These cookies track visitors across websites and collect information to provide customized ads.
Others
Other uncategorized cookies are those that are being analyzed and have not been classified into a category as yet.
SPEICHERN & AKZEPTIEREN